The Institute of International Economic Relations,the Hellenic Foundation for European and Foreign Policy,the Institute of International Relations (Panteion University), the Department of Political Science and International Relations (University of Peloponnese) and the Department of Mediterranean Studies  (University of the Aegean)  co- organized on 30th April   a conference on  The  New Silk Road  of China /One Belt, One Road (OBOR) and Greece. The conference took place at the Conference Hall of the Hellenic Ministry of Foreign Affairs “Yannis Kranidiotis”.

In his address  H.E. Ambassador Zou Xiaoli of People’s Republic in Athens underlined  that The New Silk road of China will be a huge infrastructure project connecting Asia and Europe. This project will promote the cooperation and the mutual understanding. It will be a win-win project which will promote other segments such as tourism, culture, economy, media and studies. Ambassador Zou Xiaoli pointed out  that, Cosco is an opportunity for Greece to return to international market. “It is China’s consistent position that Greece should stay in the Euro zone and the EU should step up cooperation with Greece to jointly deal with the European debt crisis. China has provided assistance to Greece to the best of its ability through real actions”.  Mr Nicolas Vernicos, President of International Chamber of Commerce- Hellas (ICC),Vice Chair Silk Road Chamber of International Commerce, China  delivered the keynote address on “ICC and the Silk Road Chamber of International Commerce. Mr Vernicos is confident that the Silk Road will create a period  of opportunities and investments which will not only promote the cultural and informational exchange but also the anti-corruption uses.

The first session covered China’s policy  on the the New Silk Road, as well as China’s political system and its Grand Strategy. The second session offered new approaches to strengthen Greek – China relationship in the framework of Cosco’s investment in Piraeus and the role which Greek shipping industry is going to play in the OBOR Project. 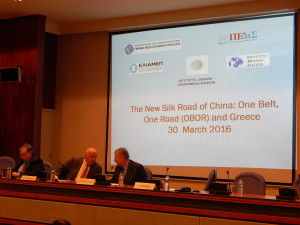 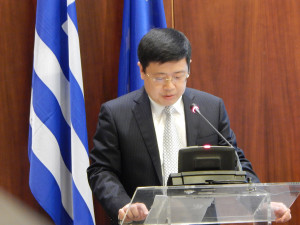